Find one near you

Karen White is a participant in the Amazon Services LLC Associates Program, an affiliate program designed to provide a means for sites to earn fees from qualifying purchases at Amazon.com.

Karen White brings her readers back to the Lowcountry–to Folly Beach, South Carolina, and into the lives of two war widows whose lives intersect only by the bookstore they own sixty years apart.

When a box of old books hiding cryptic love notes in the margins is discovered, the lives of the two women collide, spilling secrets of an old love affair and an unsolved disappearance from 1942, and offering a young widow hope for a second chance. 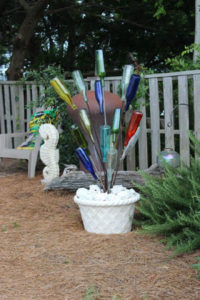 “White has a clear, sweet voice, and the ability to mark occasions from multiple viewpoints. Her characters are rich and captivating…”
—RT BookReviews

“If you crave a tale that will have you burning the midnight oil in order to get to the next chapter, then make ON FOLLY BEACH one of your must reads this summer.”
—Jackie K. Cooper, The Huffington Post

“On Folly Beach is a perfect summer read – heck, a perfect read for any time of the year. Karen White knows how to spin a perfectly crafted story and/or mystery, and readers are sure to love this soon to be best-seller…”
—The Best Reviews

“Karen White weaves history (some little known), daily living, love, deceit, sorrow, and survival together in On Folly Beach. She bombards the senses with vivid imagery, poignant metaphors, and analogies…. Emmy’s and Heath’s personal battles entwined with the historical characters’ battles mak(es) On Folly Beach compelling. It is a KEEPER!”
—Long and Short Reviews

“On Folly Beach is a terrific book with a thoughtful plot, a dash of history, and the promise of future happiness. It’s the perfect story for an escape from the heat or to stick in your suitcase as you head off for vacation.”
—The Conroe Courier

“Heart-warmingly tender, with a bit of mysery and intrigue, and the feel of the Carolina ocean breezes, ON FOLLY BEACH makes the perfect summertime reading choice.”
—Wichita Falls Times Record News

Without a doubt, ON FOLLY BEACH is White’s crowning achievement.
—Fresh Fiction

The buzzing from the B-24 bomber approaching Center Street started like nothing more than that of a sand gnat, but soon the noise filled Maggie’s ears to the exclusion of everything else.  She ran out onto the front porch as Jack McDonough buzzed his hometown on one of his regular fly-bys.  She waved, not sure if he could see her, then ran back inside and up the stairs to her sister’s bedroom, recently relinquished to their widowed cousin, Catherine.

“Damn that Jack!” came a woman’s voice from inside the bedroom.

Maggie opened the door without knocking and fixed a reproving look at her cousin.  “Watch your language, Cat.  There are young ears in this house.”

Catherine stood on a chair while Maggie’s nine-year-old sister, Lulu, used an eyeliner pencil to draw a line on the back of Cat’s long, tan legs.  Lulu sent a worried glance toward Maggie.  Lulu never liked to take sides, but usually ended up with Cat, anyway, whether she wanted to or not.  It was hard to say no to Cat, no matter who you were.

Catherine waved her left hand with the gold band winking on the third finger.  “I’m an adult now, and I can say what I want.  And look, he’s made Lulu mess up and now she’s going to have to start all over.”  She wiped her forearm across her forehead.  “Damn, it’s hot in here considering that it’s January.  I need to open this window right now.”

She stepped off the stool and perched herself on the wide windowsill of the casement window.  Squatting, she lifted the lever while pushing into the window with her hip.

Maggie bit her lip but when she couldn’t stand it anymore she said, “You’re going to get yourself killed, Cat, if you lean on the window while you open it.  Why don’t we just wait so I can call somebody to get it fixed?”

“And die of heat prostration first?  I’d rather not, but thank you very much.  Besides, I’ve been practicing and I know how to do it now.”  As if even mechanical things couldn’t argue with her, the window gave way at the same moment Cat leaned in to prevent herself from toppling out of the second-story window.  “See?” she said, grinning as she stepped from the sill and back to the stool.

Maggie sat on the edge of the white chenille-draped bed in front of the open window and shrugged out of her sweater.  “It’s only sixty degrees, Cat.  Hardly what anybody would qualify as hot and certainly not enough to warrant putting your life in danger to open a window.”  A cool ocean breeze flipped the eyelet curtains into the room as if to accentuate her point.  She noticed for the first time the tight white blouse and red skirt her cousin wore.  “Are you going somewhere?”

“Out.  I don’t care where, just as long as I’m out.  Because of all the soldiers coming in they’re having dancing on the pier, even though it’s not summer.  I swear I can hear the music and I don’t see why I can’t have fun just like all the other girls.”  Cat sent her a petulant look that only made her look more dangerous.  Before her death, Cat’s mother had always hoped some Hollywood producer would discover Cat and make her a star.  With her blond hair, green eyes and a body with curves in all the right places, she was sometimes mistaken for Lana Turner–a mistake Cat rarely corrected.

Maggie bit her lip, not wanting another row.  But a promise made on her own mother’s deathbed dictated that she had to try to rein Cat in, if such a thing were possible.  After a deep breath she said, “It’s too soon, Cat.  What will people say?  We only just buried Jim, and his death deserves his widow’s respect.”

Cat remained where she was like a golden statue, eerily silent.  Lulu, sensing the upcoming battle, scooted away into a corner, hugging her knees to her chest.

In a deep voice that didn’t even sound like hers, Cat said, “Jim’s dead, Maggie.  Not me.  I’m only nineteen years old, for God’s sake!  I’ve got my whole life ahead of me, and I’m much too young to be buried next to a man I was only married to for three months.”

Lulu began to cry, the sound like a whimpering puppy.  She’d loved Jim as only a nine-year old girl could.  It was because of her that Jim had come into their lives.  She’d fallen at the roller rink and hurt her leg, and Jim had carried her home like a knight in shining armor.  Maggie had thought so, too, warming to his easy grin and gray eyes, touched by stories of his own little sister he’d left behind in Louisiana.  He’d taken her dancing twice, and had kissed her once.  But then he’d met Cat, and there had been no more dances or kisses.

She stared at her cousin now, the old promise rubbing her like a new shoe.  They’d been raised together, their mothers being sisters and Cat’s father having deserted them long before Cat was even born.  Maybe it was because only Maggie saw the desperation in Cat, the hunger and loneliness that dogged her as she hunted for love.  And it would have bothered Cat greatly to know that most of the time Maggie only pitied her beautiful cousin.

Cat stared out the window.  “I want to live.  I want to dance.”  She turned around, her eyes hopeful.  “Come with me, Maggie.  You can be my chaperone, although it should be the other way around since you’re single and I’m the widow.  It’ll be fun.  Just like old times.”

Maggie looked down at her freshly dyed black dress, and her frayed fingernails and stockingless pale legs.  Going dancing with Cat was never fun.  She’d slide into orbit around  Cat’s sun, cast in shadow from her light.  She wondered sometimes if Cat needed her to go so Maggie could witness that Cat was desirable and wanted, as if to prove that her father’s leaving and her mother’s death had nothing to do with them not wanting her enough.

Cat stepped down off the chair, taking off the high-heeled pumps that she’d badgered Jim into buying for her instead of paying rent.  She stood in front of Maggie, her green eyes pleading.  “Come on, Maggie.  I can’t go by myself–what would the neighbors say?”

Maggie turned away, shaking her head at Cat’s use of Maggie’s own argument.  “You’re a recent widow, Cat.  You’re not supposed to want to dance.  Or be in the company of other men.”  Her heart tightened a little as it always did when she thought of Jim, of the way his eyes crinkled in the corners when he smiled, or the way he looked at you when you were speaking as if there was nothing more important in this world than what you had to say.

Cat turned slightly to catch her profile in the cheval mirror in the corner, smoothing her blouse and skirt to accentuate her figure.  “In case you hadn’t noticed, Maggie, there’s a war going on.  All bets are off.  Things that weren’t okay before are perfectly acceptable now.”  She lifted her left eyebrow in the way she’d perfected after she’d seen Gone With the Wind.  “I’ll let you borrow my blue dress–the one with the pretty collar–and my mother’s brooch.  I’ll do your makeup, too.  I can make you look like Bette Davis in that movie you like so much.  You’re just as pretty, you know, if you just put some effort into it.  Don’t you want a husband?  There’re men everywhere now.  And it’s up to us women to do our duty before they head off to do theirs.”

“Jezebel,” Maggie said, saying the title of her favorite movie that Cat could never seem to remember along with her favorite ice cream flavor or how she was shy around men.  At least she had been until she’d met Jim and forgotten to be shy.

“What?” Cat asked distractedly, still studying her reflection.  “Oh, right.  The movie.  Anyway, I can make you look just like her if you’ll let me.”  She grabbed Maggie’s hands and squeezed them, looking right into her eyes and she knew what Cat was about to say before the words were out of her mouth.  “You owe me, remember.”

Of course she did.  Cat had been reminding her since Maggie was eight years old and on a dare had left the safety of the sand and dove headfirst into an oncoming wave.  She supposed it had never occurred to either of them that she couldn’t swim, but Cat, with her strong and steady strokes, had made it to her side and hauled her out back onto the sand like a beached whale before another wave could drag her out into deeper water.  And even though she reminded Maggie often that it had been she who saved her, Cat never did once mention that she’d also been the one who’d dared Maggie to do it in the first place.

“Fine,” Maggie said, giving in to the inevitable, silently wishing she could stay home again with Lulu and their books, slipping away into other worlds where she was confident and beautiful like Cat, and men were honorable and worthy like Jim.

Maggie smiled back half-heartedly knowing that she already did, and watched as Lulu turned her face away and began to cry again.

Print a list of all of Karen’s books in descending chronological order, which you can check off as you read each book.